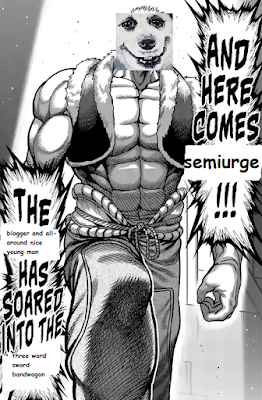 1. MILK DROWNED KITTEN: A wooden toy sword with its blade and grip wrapped in soft leather. Cuts like fine, enchanted steel despite this. While you wield it you lose all skill at swordfighting, and can't use any special techniques. The same happens to your enemies.

2. SIGNS IN BIRDS: An elegant, silver-plated smallsword. The crossguard is molded to resemble an eviscerated dove, its wings spread and its trailing guts twining down into the grip. Up to three times per day the sword can "capture" an item reflected in its blade. The item must be small enough to fit through a hole with the same dimensions of the blade. Items are stored in stasis in an extra-dimensional space until the blade is tapped to knock them out. Captured items can be seen as if reflections on the blade's surface.

3. CROWNED BY LILIES: A spatha enameled with abstract purple flower-patterns. Its handle is made of living wood, which sprouts blooms if left to lie long enough. If someone surrenders to you after you defeat them with the sword, you can prohibit them from violating the terms of that surrender as if you placed a geas on them. This geas can prevent them from doing things (e.g. "don't attack me anymore") but not make them do things (e.g. "fight my other enemies for me"). It is sought by a well-connected secret society who believe it to hold another, truer name: "MASKED BY STONE", the prophesied tool of their tyrannical messiah.

4. CORN SPITTLE BOON: Wootz steel with gentle ripples, jian-esque in form. Its crossguard is an open scallop shell. Those touched by it have their pains eased, whether mental or physical. The sword's wielder can heal any wounds dealt by it, and once per day can heal a wound dealt by someone who's been healed by the sword.

5. SET AGAINST SEA: A bastard sword embellished with blue coral filigree. Its pommel is shaped like a decapitated seahorse. Forever cool to the touch, just over the edge of uncomfortable. All fire within 10 feet of the sword is extinguished. This extinguishing extends out to 30 feet along the arc of a swing. Vapourizes water into chilly mist within the same distance (though any mixture less pure than seawater is not affected).

6. BEHOLD BESTOW BEHAVE: A platinum-edged paramerion. Its blade is etched with the names of all its wielder's ancestors with exquisite caligraphy. A chorus cries out in joy when it's drawn. If you are entirely unharmed and unblemished while wielding the sword, you become surrounded by an aura of majesty. Those with hostile intent must test morale to so much as meet your eyes. Royalty will treat with you as an equal. If you are hurt or dirtied while wielding the sword this effect inverts. All reaction rolls are downgraded a step, you are attacked preferentially in combat, and in civilized society treated about on par with an improbably flatulent leper. This curse lasts until you wash the sword with an expensive bottle of wine.

7. CALLED YOUR NAME: A rose gold blade that slowly undulates between straight and curved. Phantasmic red petals drift in its wake when swung. While fighting with it, a sword-bearing figure made of similar petals appears and fights by your side as a 1st level fighter. They will not leave your side or do anything but fight alongside you. If slain, the figure will remain dormant for a week. The petal-formed figure will also appear in your nightmares to soothe them.

8. RETURN WITHERS TRIUMPH: A chokuto with a grip carved from a horse's tibia. When it's wielder is doing well they will hear cheering and glorious music. When they're doing poorly they'll hear mockery and farcical tunes. Three times a day at the beginning of a fight its wielder can send out a mirror image of themself while they become invisible, both effects lasting for a single round.

9. SEVERED SCALES SUMP: A golden rapier, its blade made of beaten coins. The faces of kings and emblems of nations stretch obscenely to its tip. When laid between two objects it will turn to point towards the more valuable of the two. When used for a duel, its wielder can wager any prize on the victory, so long as what each duelist wagers is agreed to be equal in value. This agreement doesn't need to be made at the outset of the duel, or even made with the knowledge that there will be a duel. You could get a king very drunk and trick him into agreeing that his kingdom is worth the same as your horse, then duel him and take it the next day.

10. LONELY NARROW LIGHT: A flyssa with a blade of clouded glass. Its grip is wrapped in strips of haircloth. A cluster of tiny tin bells jangle dangling from its guard. If something is blocking your path, then striking it with the sword will do an absolute minimum of 1 damage, even if it's a solid block of adamantine. Once, and only once, the sword can be used to cut a path through anything, even up to slicing a new pass through a mountain range. After being used like this the sword dissolves into a cloud of dry autumn leaves, never to be seen again for a generation or more.

12. THIS HIDEOUS MIGHT: Big gross flesh-sword. Blade of talons and teeth. Fuses to the hand that wields it, can then only be removed by amputation. You can learn to retract the sword into your arm with focus, and then that arm will just look oversized and misshapen, but if you get angry or scared it'll spring out. Once a day when you kill something with it you can absorb yourself into them and pilot them around like a pseudo-living zombie for 1d6x10 minutes.

13. GALLOW AMONG BOUGHS: A greatsword with a square-tipped blade of dull grey stone. If someone it's wounded has broken a law of the land they're in, the sword will shriek their crimes as it tastes their flesh. Its wielder can also transform into a large monkey with a tail that can tie itself into a noose. If they lose hold of the sword they can't turn back until they touch it again.

14. WARM WET USURPATION: Shining steel, wide and angled like a guillotine blade. Its surface is always dappled with blood, which congeals to sticky sluggishness but never fully dries. If cleaned the droplets return like dew at the next dawn. Those killed by it are not lost to the hereafter, but broken apart and returned piecemeal to the living. Their killer becomes fated to encounter them again. Kill a goblin, and return to find the shopkeeper's skin tinged green. He remembers where the goblin hid its stash of stolen treasures, but also becomes more goblinish in his dealings with you. Kill a friend and a monster you encounter might have inherited her positive disposition towards you, and her laugh. This one's pretty loosey-goosey, hard to put simply in game terms.

15. METE DULL INTOXICATION: A near-white whinyard with a crystalline glimmer to its metal. Its pommel is a pale opal carved into the shape of a gulping whale. Anything cut completely through by this sword is cut exactly in half, regardless of whether that makes sense for where it was cut. If a mixture is poured over the sword's edge then its wielder can cause one component of the mixture to flow over one side and another component over the other, perfectly separated.

16. THOU'ST ALSO FORSAKEN: A cracked harpe of tarnished silver. Organic crimson veins can be glimpsed in the cracks. If you stab yourself with it you die. Your ghost is freed to astral project around and talk to other ghosts. If the sword gets pulled out you spring back to life and the wound immediately heals into a translucent scar that only occasionally leaks ectoplasm. If you move too far from your body while you're a ghost then the risk that something else might steal your body when the sword's removed increases.

18. HOPE'S FURTHEST TINE: An estoc made from entwined bands of copper, brass, and bronze, spiraling to its point like a unicorn's horn. If you can rightly name someone within line-of-sight's deepest desire, you can then lunge at them, crossing a mile in an eyeblink, and pierce them through the chest, dealing triple normal damage. Naming a desire falsely causes the sword to unravel and bind the arm that held it for a day.

19. HOWLING BROTHERS REUNION: A gladius with a blade of yellowed bone. Its pommel is a petrified eye with a yellow iris and a slit pupil. While bearing the sword, creatures instinctively react to you as if you were an apex predator. Domesticated animals spook and flee, wild animals keep their distance or challenge you for territory, people back away without realizing precisely why. Wounds dealt by the sword become indistinguishable from those received from being mauled by a pack of very large wolves.

20. YET DARK WITHIN: Hewn from a single chunk of obsidian. The sword is covered in shallow, intricate reliefs that depict the entirety of a saint's life, from birth to martyrdom, with particular scenes revealed depending on the angle light shines on it. In direct sunlight a pleasant halo forms around it. The grip has countless small, sharp edges that nick the hand that holds it, dealing no damage but drawing a constant trickle of blood. The sword will not unveil its magic unless held by bare flesh. The shadows of those it kills are bound to the blade, and can be commanded by its wielder. They're normal shadows, not the monster also called a shadow, and are restricted by ambient light, but if enough of them overlap you could make a spot very dark.

21. AS WE JUDGED: A khopesh forged from iridescent starmetal. It radiates an itchy warmth. It has 3 MD per day its wielder can use to cast Explode Corpse1 on those killed by it. If you tell a lie while wielding it you vomit sparks and smoke and drop to 0 HP. If you break an oath or promise while wielding it you explode.

22. CUT FOUR CORNERS: A gargantuan sword of gleaming titanium, inlaid with the antecedents of scriptural passages in gold. It is far too heavy to be lifted by human hands, unless the sword wills otherwise. It has the tremendous pride of one who was borne by the greatest angels to make the cuts used to fold the once-flat world up. If used to carve a perimeter around an area, that area sloughs out of the universe and forms a pocket dimension.

1From Many Rats on a Stick GLOG by Skerples. Thanks Skerples, great job!: