GLOGtober Day 1: Collaboration with Filth Pig (Not Safe For Work But You Shouldn't Be Reading RPG Blogs At Work Anyways, You Slacker)

Friend of the blog Filth Pig over at The Slopyard has agreed to collaborate for the first day of GLOGtober (atemporal).

The subject of our collaboration is monsters. Each of us made 3 images of monsters for the other to interpret as they will. One of his images has a vagina for a mouth. A real image of a real vagina, photoshopped. I didn't request the vagina-mouth, matter of fact if I knew that getting a monster with a vagina-mouth was a possibility I would've specifically requested not to receive one. That's the trouble with collaborating with pseudonymous internet acquaintances: it's like a box of chocolates, you never know what you're going to get. However the die's been cast, the Rubicon crossed, the Rubik's cube solved to the last colourful square. There's no going back. It's a matter of principle. I can't just throw Filth Pig's work back in his face now that I've received it. A man's work is like his baby. Would you throw a baby? Like it was a football? I certainly hope not.

Anyways it's not spoilered or censored or anything so if you don't want to see the vagina-mouth monster close this tab now: 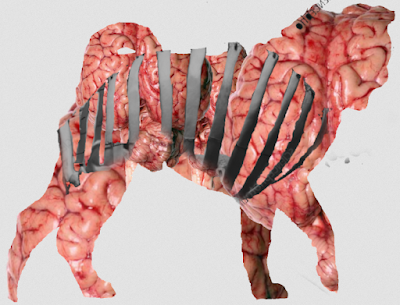 There are dogs bred to hunt, to herd, as companions, even as dog-fighters. Perhaps strangest of all are those dogs bred to think.

The cerebrellus is the most famous of the thinking dog breeds, which isn't saying much as all such breeds are abominations that are most often purged from history wherever they're found. It was once the sole property of the inquisitor-nuns of the Unspoken Censor, but a century ago a breeding pair was stolen and their inbred descendants can now be found in the company of secret policemen, inhumane scholars, and similar sorts.

Each cerebrellus must be trained from puppyhood to be sensitized to the psychic currents of particular sorts of thoughts. One might be trained to think about engineering (and leave a trail of mauled engineers behind it even as it designs bridges any one of those engineers could never even dream of), another might be trained to sort through the contradictions in a theological tradition. The competition to possess a  cerebrellus specialized in a particularly esoteric field can become bloody indeed. If you think of time as like a multitude of serpents racing to reach the crown of a narrowing tree, shoving each other down and around or even off the tree entirely in their competition, you will be slightly less wrong than those who think of time like a straight arrow flying from the universe's beginning to its end.

These serpents are the many timelines, their supremacy or failure created by perception as much as by brute physics, swapping places as history's rewritten.

Urgrom comes from a timeline that lost its struggle entirely, falling into the void beyond potential where colourless green ideas sleep furiously. He survived because he was the best-documented being within it, a god-emperor who ruled from the strangling heights of the upper air to the world's burning heart. He's become much reduced, his divine ancestor extinguished before the neolithic in his new reality, but still mighty.

This dethroned emperor does not miss his reign, but he does mourn his hundred-strong harem which he loved with a passion that would literally explode a more mortal heart. They now exist, and have only ever existed, in his memories.

He spends what remains of his long, long life building magnificent memorials to them, to anchor their spirit in the world. He raises halls of glittering sapphires to reflect the thousand bottomless eyes of Yzchawxiel, who awaited his return from campaign at the pinnacle of his palace, lava-spewing siphons for Nukavira, and so on and so on, without rest. Those who despoil these memorials are crushed under the mountain of his fury. 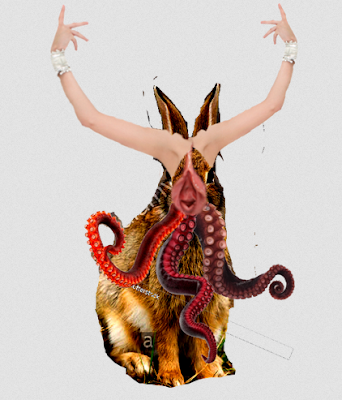 At dawn on the sixth day, the heavenly host gathered and squabbled over the pile of parts left from the fifth.

Their squabbling birthed riotous creation. To the wolves, fangs were granted, to horses hooves. Humanity, to the envy of all others, received the Word.

As the light waned the pile of parts grew smaller and smaller, until only a smattering was left. Shrugging their shoulders, the angels stuck that smattering together and created the smackalope.

"What the fuck?!" the angels cried, "This sucks, why did we do this", and brought down the veil of night so that they would no longer have to look upon it.

The LORD, who had just come back from killing Leviathan's mate and thus was too bloodied to see clearly, took pity on the smackalope and granted it immortality.

And so to this day we must dread the slap of the smackalope.

Click the button below to generate your orb, generator made with Slight Adjustment's generator generator:

The printing press was a revolutionary invention, allowing the spread of ideas on a scale never before imaginable. Some of those ideas (racism, freemasonry, etc.) were bad. This is a generator for those sorts of pamphlets.

Warning: Not all pamphlets may be racist.


Generator made with friend of the blog Spwack's thing here.

printer
a{quality} craftman's guild
a{quality} experimental artist trying to get their name out there
an enigmatic party whose true identity is the subject of many dubious theories
a{quality} university press
a{quality}, wealthy merchant
a{quality}, traumatized military officer
a{quality}, downwardly-mobile aristocrat
a bohemian gathering of indolent merry-makers
a dissident priest insired by a prophetic vision (and possibly hallucinogens)
a lone crank

reaction
rabid conflict between supporters and opponents
ironic adoption
a call for criminalizing such agitations
apathy
mob violence directed against those related to the pamphlet
the foundation of a secret society dedicated to fulfilling the pamphlet's goals
a crackdown on the free press
further conspiracizing
amusement, with a popular satirical play being created based on it
mockery and scorn
a small but zealous following
abject disgust