1. Washed up with crates of expensive wine, been too drunk the whole time to realize the gravity of their situation.

2. Happily married to siren wife. Lures in passing crews that might be too wary for her song with a story about hidden treasure.

3. Former slaves escaped from sinking vessel. They’ve made a utopian egalitarian society founded on the myth that they’re the only virtuous souls left in a drowned world.

4. Cheapskate merchant captain whose crew mutinied and went pirate. Will offer banked assets if returned to the mainland, but cheap out on that too.

5. Deliberate hermit, has gained the secret to calling down lightning from their sacred meditation. Wants to redpill you on the entrapment of material desire. Their lightning behaves as ordinary lightning once called (strikes tallest thing in area, can be grounded, etc.). The secret to calling lightning can be passed on by the hermit, but is only retained by the student so long as they keep no possessions except the clothes on their back and a beggar’s bowl.

6. Talking dolphin, exiled to shore for cannibalism. Friendly, willing to trade the best whaling and fishing spots, locations of undersea ruins, in exchange for return to the sea. Utterly sociopathic. Has been living off crabs that scuttled too close.

7. Genius shipwright. Has built a ship faster than any other on the waves by themself, using only materials found on the island. Needs a crew to actually sail it, willing to let you take it if you make them captain.

8. Vengeance-crazed whaler, believes island she’s stuck on to be her nemesis-leviathan. Waiting poised for the moment it stirs to strike the death-blow.

9. Ancient alien with crash-landed spacecraft, looks like a person with a weird forehead but this is actually only a biological probe controlled by horrific, dying true form pinned in the wreckage.

10. Beard to his knees. Falsely convicted of horrific crime and exiled long ago. Has been building up legal case this whole time, just in case. Always carries thick sheaf of bark-scratched arguments.

12. Family of cheerful fish-men and their senile castaway father. Raised on fantastically misremembered stories of the world beyond their island. Want to come with you and see it all.

Special bonus #13: Juggalo Prospero (I ran out of ideas)
Posted by semiurge at 2:01 PM 3 comments: 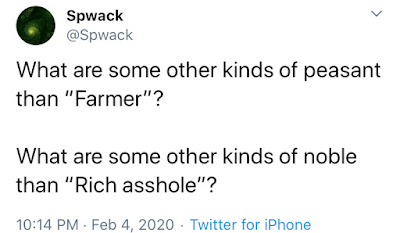 D20 Other Kinds of Peasant Than “Farmer”

1. Old and shiftless lackadaisiac, reluctantly fed and housed only because she can make the best wine this side of the market town. In vino veritas, knows everyone’s dirty little secrets.

2. Near-mute apiarist, speaks only through buzzing noises. Preternatural affinity for bees and beekeeping. Generous as only someone without the little human obsessions with money and status can be.

3. Stakhanovite anachronism, bigger and stouter than anyone who’s grown on a peasant’s diet should be. Helps everyone with everything until his feet can’t hold him up.

4. Pagan holdout, keeps relations copacetic with the nameless things of the field and the forest. There’s an unspoken understanding that blind eyes will be turned to lamb-blood painted on trees so long as they do their job well.

5. Childless widower, grey as his goats. Seen enough people die to know how to ease their suffering, and maybe, just once, heal them.

6. Puritanical baker. Spits in the bread of those she deems sinful.

7. Half-mad peddler hawking trash and treasures. Lost the ability to tell one from the other a while ago, can't remember which relics are the fakes.

8. Washed-out squire with an inferiority complex. Retains martial skill to match most knights.

9. Depressed cheesemaker, deep in debt to the last sort of people you'd want to be in debt to. Being pressured to poison targets with tainted cheese to pay it off.

10. Cynical swineherd, self-styled philosopher. Mocks the pretensions of people who think they're better than her pigs.

12. Militiaman, was levied off to war and came back broken. Keeps watch all night with his spear and sling. Far too eager to give his life to defend his fellows.

13. Drunkard gravedigger who's become a pariah for passing out in an open grave one too many times. Desperate for non-corpse company, tells a lot of jokes but isn't good at it.

14. Eccentric blacksmith who's become worryingly reclusive recently, requesting bizarre provisions and raving that he's forging something no human hands have matched before.

15. Narcissistic village priest straining under the psychological fracture caused by his need to be seen as a paragon worthy of guiding the community, and his sense that he deserves fine food, fine clothes, and all the other luxuries which flatter his vanity.

16. Stern gong-farmer with a hair-trigger temper. Demands decorum to match the ignominy of his profession. Scatological humour sends him into a screaming rage.

17. Potter whose latest products have been frighteningly malformed. Their sleep is disturbed, their appearance is haggard. A haunting force has insinuated itself into their work.

18. Disillusioned part-time bandit and poacher. Ashamed of what they sometimes do, but lamed by injury and struggles to feed their family by decent labour alone. Sole confidante is their mule.

19. Happy-go-lucky fisherman with a quiet faith in honest, humble living. That faith is sorely challenged by the thing she dreams of at the bottom of the pond.

20. Itinerant hunter who’s seen such sights on the dusk-dark trails. When she thinks nobody’s around she’ll whistle snippets of songs she’s overheard, songs to call rabbits to the stew-pot, songs that weave the roots and the branches.

D20 Other Kinds of Noble Than “Rich Asshole”

1. Gregarious epicurean, all worries smoothed away by the weight of gold. Wants you to join her for dinner, hear all your stories. Has the weird drugs.

2. Morosely pious second son, dragged back from the seminary after the untimely death of his older brother. Resigned to worldly concerns out of fear of his father.

3. Fiery young reformer, their family name the only thing keeping accusations of treason at bay.

4. Inveterate duellist. Quick to challenge and quicker to forgive after first blood’s been drawn. Aspires to make sword-fighting as prestigious an art form as sculpture.

5. Cloistered fantasist remaking their castle and servants in the image of their beloved fairytales.

6. Prickly champion of their minor holding. A defender of the weak and uprooter of corruption (at least within their own borders), for the sake of propping up their ego rather than sincere heroism.

7. Boisterous contender. Loves nothing more than tournaments and gambling, faints at the sight of real carnage.

8. Barefoot beggar-prince, eyes turned always to the heavens as if expecting a response any day now. Gives alms by the bushel. Dogged by courtiers imitating their asceticism.

9. Furtive scion of hidden inhuman bloodline. No innate inimicality to humanity, but will jump to hostility if discovery seems likely, from memory of persecution.

10. Ennobled by letter patent for outstanding service on the battlefield. Has ambitions to rise further still, and an appreciative eye for those who feel the same hunger. Ruthless towards rivals, unbreakably loyal to proven allies.

11. Discomforted around people, prefers the company of their horses and falcons. Interested in trophies from stranger beasts, or better yet, a live one captured.

12. Wild patron of inventors and tinkers, torn between two clients. One, a crude genius at creating engines of war. The other meek, less inspired, who designs for the convenience of common folk.

13. Supposedly a masked leper, actually a peasant in disguise who murdered a rich asshole noble and took their place. Pretty decent, notwithstanding the murder.

14. Artistic dilettante chasing a dozen muses, spending a fortune on paint only to retreat to the countryside to pen poems a month later.

15. Victim of a fitful yet terminal illness. Frantically driven to sponsor and accompany one last great adventure in their brief reprieves.

16. Matriarch of storied lineage fallen on hard times. Slowly but surely growing respect for the working people she must now rub elbows with.

17. A robot running on programs of age-old ceremony and etiquette (figuratively(?)). Has the stiffest upper lip. Would rather die in the deepest, dankest oubliette than cause offense.

18. Hopeless serial romantic. Showers whoever the object of their impossible affection is this week with gifts and favours.

20. Buys wholeheartedly into chivalry and noblesse oblige. Embarrassingly terrible at fighting. Accompanied by cynical brute retainer to keep them out of trouble.
Posted by semiurge at 4:38 PM 3 comments:

Note that the generator isn’t weighted based on likelihood, and will likely produce a number of wines that don’t or can’t exist in reality as we know it.


Find the automator for the generator here: http://paperelemental.blogspot.com/p/list-to-html-generator.html
Posted by semiurge at 1:37 PM 1 comment:


Press the button to get a cult and the idol they worship.

You can find the generator automator here: http://paperelemental.blogspot.com/p/list-to-html-generator.html
Posted by semiurge at 7:07 PM 7 comments: