I like horror movies, please rec your favourites in the comments. If you don't I'll feel like a goober for asking for them.

It's time for that annual event that everyone's been waiting for:

Ah, the horror potential of time loops! Realized by only an enlightened few!

Such a good movie. Scary, heart-lifting, very funny, Anno does it again! MFW baka gaijins try to make a kaiju movie. OH wowza zowza but they're big dumb action flicks X^D <= SHUT UP. They're not even good at that.

Anyone else think John Cusack looks like Nicholas Cage? This is like the Oculus before Oculus, and I preferred it to Oculus.

Extremely comfy. Strangers trapped in giant, enigmatic murder-machine experience social breakdown. You ever get the feeling people have forgotten how to make good movies?

A Nightmare on Elm Street

A lot of the scenes where Freddy's chasing people are just goofy. I liked some of it but a lot of this movie is like when people say a work's foundational to a genre or whatever and then you watch it but don't enjoy it as much as more recent stuff because the more recent stuff refined what it invented.

The surreal/dreamlike effects and killings were the best part. Gotta have surreality in horror, but not boring surreality like Suspiria.

Practical effects are so much better than CGI. Every MCU Ready Player 1 CGI garbage shitfest should be deleted, all those responsible burned. Bring back practical effects. Remember what they did to the Thing prequel? It was also named the Thing. They're doing a remake too apparently. Propagation of bad art should be criminalized.

I liked this movie.

The Cook, The Thief, His Wife, & Her Lover

A movie that feels like a stage play, about the male fantasy of women being crazy into guys who eat alone at restaurants.

Albert Spica is a solid basis for an ogre.

Joseph Solomon is a solid basis for a wizard. Kind of works towards a higher purpose, but in a selfish, petty, fucked-up way.

The diagrams and movements within it and so on are inspirational for a symbolic/ritual dungeon.

Mildly creepy movie, best when it's two people stuck in a shitty situation together being alternately shitty and empathetic to each other.

Lanklets, when will they learn? The movie. I like to think I'm too paranoid for someone to be able to pull this on me. If you were the sort of person to go into every movie thinking "but, like, uh, what does this say about Capitalism?" then you might come away with something like "seeking personal revenge for being economically exploited will at best probably just take out a low-level, replaceable, rise-and-grind sap while leaving the system and conditions in place to make a million more as bad off as you".

Great movie, brutal movie. A series of kicks in the teeth. Personal mortality is one thing, but total human extinction is another. Is all comfort of legacy and family ultimately cope? This one got me to cry.

Posted by semiurge at 9:35 AM No comments:

How to Re-Colonize D&D in 7 Easy Steps

There's been a lot of smart, insightful, upstanding, loquacious, thick-hipped and big-dicked people posting about colonialism in D&D, and how to un-colonize the game. Maybe you followed all their advice and were left wondering: "Hey, where'd all my colonizing go?! What am I supposed to do now, get in a polycule with the orcs and donate all my gold to an orphangae!? In the game?!".

Everyone has to wear one of these things: 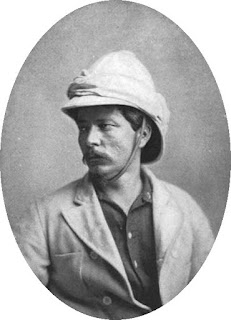 Not the British man, the thing on the British man's head. Some call it a pith helmet, others an English safari hat. Tough luck on the Euro Cup there, eh limeys? Viva Italia.

Anyways this is the most important step as it will get everyone in the proper frame of mind.

Enemies in the game must be "people" - in the sense that they are sentient and form relatively organized societies (though still savage relative to your characters' society) - else there will be no sport in killing them and nothing of value to liberate from their holdings. Their skin colour should be different from both your characters' and your own. To minimize ethical issues, I recommend using Italians.

When intra-group chatter quiets down, chip in with a cool catchphrase like "Deus vult!" or "nits make lice!". Something that shows you're 'with it' and irreverent of progressive orthodoxy. Everyone will think you're really cool every time you say it.

If you are playing over discord or some other online service, consider making your avatar a Pepe, or Groyper, or Apu.

Arrange the worldbuilding such that the religion of your player characters is objectively correct, and that the savage pagans worship demons, fallen angels, false idols, etc. Make the religion have a bad afterlife for non-believers so that you're justified for extreme ends to convert them.

If you must go No. 2 during a game, use a squat toilet. If you do not have a squat toilet, squat upon whichever toilet you possess. This will deepen the feeling of being in an exotic vista, and is better for your ass.

Race is old hat. We've now got many more biological categories in which to sort and valuate people. For each of the 16,777,216 possible combinations of 3D6 attributes rolled in order, assign a haplogroup and cranial dimensions.

Get billions of dollars of funding from the United States of America. This is the second most important step in modern colonialism, and probably the most difficult. I'm not even sure how you'd get the USA to go against its national interest like this. Maybe try privatized espionage and blackmail, or getting a base of evangelical support. Disproportionate influence over media and academia might help too.

Anyways, these are 7 easy steps to re-colonize your Dungeons & Dragons games.

Disclaimer: Please do the opposite of all of these*.

* Except for the squat toilet one.

Click the button below to get a haunted house:

Posted by semiurge at 9:30 AM No comments:

Click the button below to get a demon lord:

For your regular old rank-and-file demons, try this: https://archonsmarchon.blogspot.com/2018/10/d20x5-demons-to-summon-for-fun-and.html

Posted by semiurge at 1:16 PM No comments:

BCE & CE are cope. They're the same years as BC and AD. Accept Jesus Christ as your calendrical lord & saviour.

Click the button below for your very own alternate history. Astoundingness not guaranteed.