Certain foods provide more concentrated energy than others. You'll get many times more calories from 100 grams of beef than of lettuce.

Think of intense emotions as like refined sugar or fatty meat. They give you a big boost, right in the moment. Spirits that feed on them can afford to be big, strong, high-activity. Subtler stuff sustains slower, more docile spirits.

It's unfortunate for mortals that it's easier to induce strong negative emotions than positive ones.

There's a lineage of spirits, perhaps the oldest of all monsters, born when the first eye saw a shadow pass overhead for the first time. They are honed to prey on all the flavours of fear. One day a year they're free to enter the human world untrammeled by iron or salt, fire or sacred ground, and the Earth becomes a place of waking nightmares. 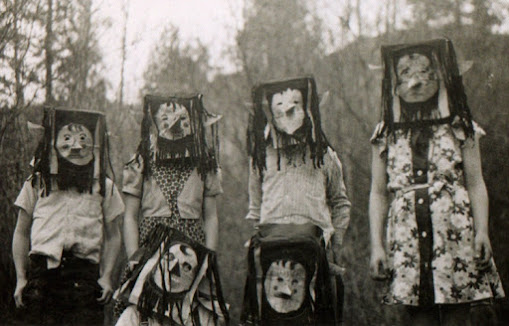 There once was a kingdom called Abrogance, a kingdom ruled wisely and peacefully. Its king was wise and appreciated peace because he was so very old. He was able to grow so old because he knew a way to pass the ravages of time onto his own unwanted children who had been prepared to receive them. Never did he need to worry about the embarrassment of bastards or the ambitions of excess sons.

Take a child of yours. Their face must be unlined by age. Split a mirror into five pieces. Line the inner sides of a box with four of those pieces. Lock the box around your child's head. Offer them up to Entropy. Stare into the mirror's remaining piece. Fixate on the signs of aging you see. Obsess over them for hours. If all's gone well and your sacrifice was accepted, the signs will disappear. Your child is no longer yours. If the box is removed now there will only be dust inside.

Abrogance is long since fallen, torn apart by envy of the king's agelessness, but the secret of making hagging childers survived it and him. For the occultist who loves nothing more than living it's not so difficult to track down. The wretched things continue to be made.

When not acting under another's orders, hagging childers can be both like the very young and very old. Excited by novelty, playful, addled, caught in repeating snippets of foggy memories. Few are capable of compassion, for none was ever shown to them. They'll make masks if allowed the opportunity, affix them where their faces should be, based on vague recollection of what they should look like.

Senescence: A hagging childer can point at you and inflict a part of the aging they've absorbed. Save or roll on the table below for its effect. Taking a moment to splash yourself with water, glance at your reflection, or rest and recuperate gives you another save.

D6:
1. Cataracts, become blind.
2. Feeble, become unable to lift anything heavier than a stick.
3. Hobbling, become unable to move faster than a crawl.
4. Memory loss, lose the abilities granted by your highest level.
5. You become wrinklier and your hair turns white. This doesn't fade entirely when the effect wears off.
6. Brittle bones, take double damage from falling and bludgeoning attacks. 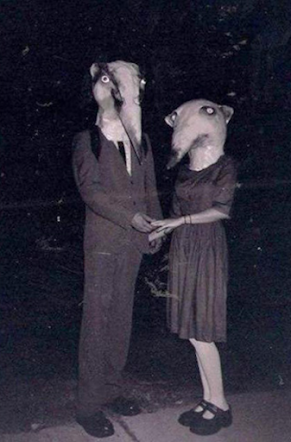 Former power couple of the lands beneath, forever dancing in Domdaniel's halls. All it took was one step out of tune. They lost their favour, lost their names, lost their heads, and were exiled. Now nothing more than scavengers, but at least they still have each other.

Mister & Missus Of-The-Den maintain their old lifestyle as best as possible. Their den is full of creature comforts, and their larder is full of human meat.

They're not savages. They won't kill just to eat. You have to offend them first.

They prefer their meat tender, and will always accept someone younger than you as a bribe.

No. Encountered: Always 2
HD: 4
AC: As chain (graceful)
Move: As human, can leap as far as they could sprint in a round
Attack: 1d12 long, thin needle
Morale: 7, becomes 12 if the other has been killed

Etiquette: The pair won't attack until their rules of etiquette are violated. They'll try to get you to violate their rules. They get an immediate attack of opportunity the first time a person violates an etiquette rule in an encounter (conversely others get an attack against them if they somehow violate one). They're happy to elaborate on their rules if asked. The rules are as follows:
1. No profanity.
2. A gift given must be matched by a gift received.
3. No outright lying.
4. One must eat with the proper cutlery.
5. One must use full names and titles when addressing another.
6. One must not refuse an invitation. 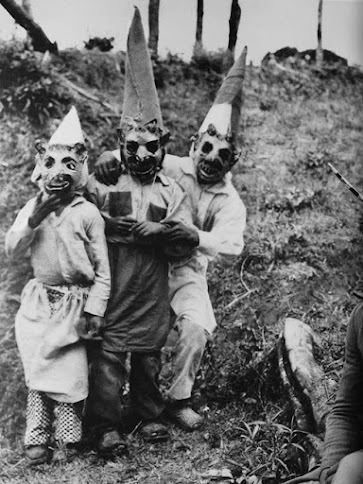 Imps that delight in secret abuses and abusable secrets. They gaslight the already victimized, dig peepholes that reveal crimes to those powerless to stop them, lure seekers to places and things of occult power, and cover up the atrocities those seekers commit to use them.

Capirosgus hate to be seen, or to be known, but so too do they hate for anything to be forgotten. They are not things of purely light or dark, but of the shadows between. For those who can deal with the whispers, half-glimpses, and concealed cruelties, capirosgus can be a source of history remembered by no others.

HD: 2
AC: As leather
Move: As human, and can bore through solid matter with the tips of their hat, leaving tiny holes
Attack: 1d6 hole in their hand that sucks a plug of flesh out of you, leaving a scarred hole
Morale: 7 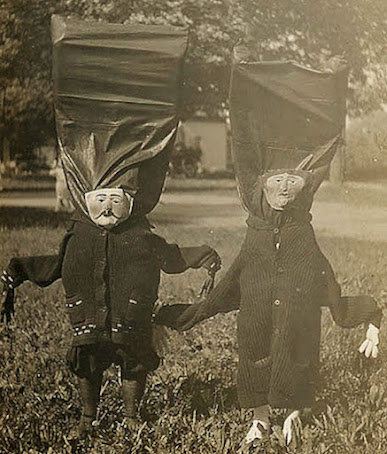 There are fairies of blessed and beloved places, of glen and glade, home and hearth.

And then there are pukelcops.

They are fairies of midden-heaps, manure-piles, moldy basements, and rotten fallen fruit.

Fairies of all sorts demand respect. Pukelcops never receive it. This makes them very upset. They want people to appreciate muck and grime. They're downright missionary about it. If you've got their attention they'll stuff your pillow with reeking fungus, replace the milk in your cows' udders with diarrhea, wash your clothes in rancid fish juice, and so on and so on.

This does not tend to make them any more respected. It's a vicious cycle.

Hurled Vermin: The pukelcop pulls some manner of awful, fist-sized vermin out of their hat and throws it at you: a buboes-afflicted rat, hairy spider, biting slug, or the like. If you do not spend a round getting it off you, take 1 point of damage each round and -2 to all rolls from the distraction.

Unclean Creature: Pukelcops surprise on a 3-in-6 in dirty environments. Salt, soap, and similar purifying substances burn them like acid, and they cannot cross a line of them. 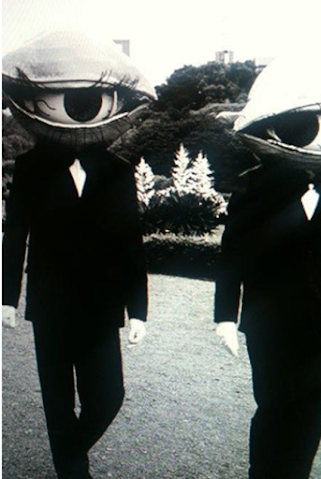 Creation is not so small or simple that even a minuscule fraction of its entirety could be held on a map. There are ripples and folds, pockets and prolapses, where things undreamt of in earthly philosophies dwell.

There is one such place, not east or west or up or down, which by miraculous natural formation is in the shape of a cluster of lenses. These lenses concentrate the illicit light of sideways spectra, letting visitors glimpse everywhere, and everywhen. This place has attracted a resident population, an audience of sinister voyeurs. While mostly content with their internal politics, gambling, and cataloguing, sometimes they need an agent to stir up the pot elsewhere. Most of the time they'll send an ulescrag.

Ulescrags' heads are big, bloodshot eyes. Their eyelashes look more like spiders' legs than hair, and twitch when they're agitated. Their bodies are made of bundled, oozing, plum-purple fibers, and almost always hidden by suits and gloves. Their voices are reedy and giggly.

Human Guise: An ulescrag can cover itself with an illusory disguise, appearing as an ordinary, if gaunt, person. Taking damage breaks the illusion. While disguised they will attempt to ingratiate themself and interrogate, asking increasingly intimate questions and getting angry if denied.

Truesight: An ulescrag can see past illusions and invisibility. It can see through walls. If it looks at you it knows everything you're carrying, and everything you can do.

Enhanced Interrogation: By clawing or touching you, an ulescrag can implant some of the fibers of its body in your flesh. After that it can compel you to follow its orders (usually to answer truthfully) or take 1d6 damage as your nerves scream. Breaking contact with the ulescrag ends the enhanced interrogation.

What is this ulescrag's mission? (D6):
1. Blackmailing a local leader into compromising their values, to the end of recording their mental breakdown.
2. Find out the feelings and intentions of all parties involved in a dramatic incident you were part of.
3. Fomenting conflict between unlikely foes for the gladiatorial amusement of its masters.
4. Investigate an area that's been occluded from its masters' sight.
5. Secure an artifact with clairvoyant powers.
6. Kill someone who's been spying back at their masters and eliminate any other witnesses.