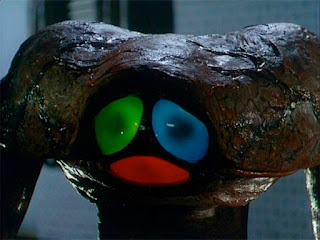 What are its aspects: Taller than two tall men competing to see who can stand taller, body like sludge only very compacted (each having a uniquely unpleasant smell that lodges itself in a inextricable fold of memory), commanding voice-recordings that echo out from every bit of glass around you (and its triplicate glass eyes most of any), galumphing gait.

Why fear such a contrivancy: Clobbering fat mauls for hands, glass explodes in glittering shrapnel when it shrieks, and most of all the infernal ingenuity of its eyes. If you can see it, it sees itself through your eyes, and through this visual piggyback controls how you see it. When it focuses its red eye, it becomes an object of abject terror. When it focuses its green eye, it appears to be an old friend you nearly forgot the face of. With its blue eye focused it becomes invisible to you when you look directly and clearly at it. Without an observer a trilumopsian is blind, and so many will befriend a mouse to have constant vision.

WHY IS THIS THING?: History is written by the victor, but the loser is preserved in the victor’s remembrance. As history outlasts victory, some come to covet this ignominious immortality.

There was an un-empire (always was, only just was, chasing the present like a hungry wolf). An un-empire, because it was conquered by all and never conquering, simultaneously at the height of soft decadence and the depths of crude barbarity. Everyone everywhere, no matter how bad the humiliation of their people, can look back on this un-empire and think to themselves “at least we’re not them”. In the ruined halls of the un-empire (which can be found close to every place, else how could they be conquered too by that isolated village?) the mocking laughter of their courts echoes, just around the corner.

The un-empire is a fiction, coming into existence from the tips of prideful pens. The un-empire took steps to preserve the fictional luxury of its elites, the pitiable illusion of its underclass. Trilumopsians are deceptive guardians of lure-sites: richly appointed dungeons to attract new victors, win for themselves new defeats, endure in memory long after the greatest kings and the monuments to their victories are dust.

Next up in the picture pong: 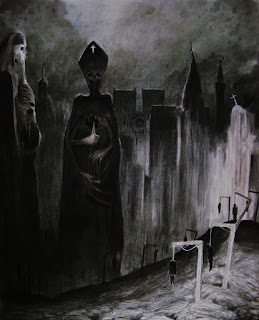