Picture Pong: Things Have Learnt to Ping that Ought to Pong

And lo! A figure strides: 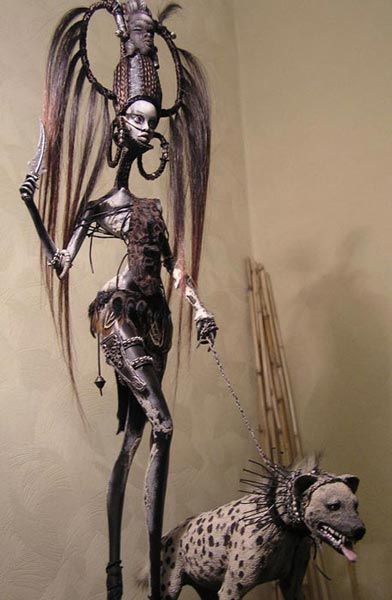 You might assume that the collared hyena our subject follows would be a pet. You would be grievously mistaken! That hyena is no less than a sacred guide, a conduit for the venerated Gnawsome Force (also less commonly called Greater Entropy, the entropy that cracks bones, shakes the earth, and kills suns, as opposed to the reviled Lesser Entropy which contents itself with smelly decay). Its laughter, bites, and defecation are each contemplated as revealed omens for different spheres.

The elegant elongation of this Laingmaiden's body means that when she was a child she found employ (and modification) as a cat, which on Mount Gigantomachus is a pest-catching profession rather than an animal, as the animal is deemed offensive and competitory to hyenas. Her fellow Langmaidens may also once have been cats, or storkalikes, lookafars, scaffs, or octobassists.

Her white lower mask, carved from the stone of a chaplain, indicates her virginal status (virginity on Mount Gigantomachus being understood as not having passed beneath the Hymenopteran Gate to seek the counsel of the Black Queen and Yellow King, and so having to carry one of their young to term in exchange). For another adulomorph this might be a sign of lack of ambition, immaturity, or counter-cultural rebellion, but Laingmaidens are ill-suited for childbearing, whether their own or someone else's, and so it may simply be a prudently healthy choice.

Her upper mask, wooden and close-lipped, tilted to stare at the sky, indicates a desire to become a seer (together, the upper and lower masks reflect the higher and lowers souls: as one is, physical existence: below; as one wishes to be, spiritual existence: above). That she places it so high on her hat means this Laingmaiden believes acceptance into apprenticeship by a master seer is close. The unbroken circle her hair is bound in is unorthodox, heretical even depending on the viewer. The circle is entropy defeating itself, an ending that merely results in a new beginning.

The woman's earrings symbolize nothing. They are just stylish.

By the swirling beigeness of the wall behind her we can tell this Laingmaiden is "slumming it" in the Footman District, so-called because it was constructed from the numerous and sparsely equipped bodies of the stone giants surmised to be common footmen.

-A Digression: Mount Gigantomachus was no ordinary mountain, but an open mass grave of stone giants broken upon each others' fists, mauls, and picks. The first of the followers of the Gnawsome Force in the area found a few maddened survivors, and swiftly dismantled them and the bodies to construct the piled city also called Mount Gigantomachus, though outside urban legend the giants are now nothing more than rubble foundations and dwindling quarries.-

The Footman District is a place for foreigners, unappealing industries like leather-making or fermentation, discontinued adulomorphs, and the people who resided on Mount Gigantomachus before the coming of the Gnawsomites, relegated to squatters in their own homeland. Among that latter group are insurgent zealots who call themselves Kosmocorpii, self-mutilators who believe their maimed states makes them a mirror of the Godhead (who must be maimed, else how could evil (and also linear time, though that belief is more obscure for understandable reasons) exist?). Perhaps this Langmaiden wields a wicked knife to defend herself from such, or perhaps she's seeking the human bones that are always in demand by seers, to be crunched by their hyenas.


And now for something completely different: 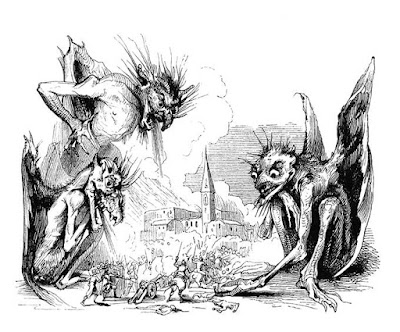