Part II in the series of making a GLOG wizard for every OG wizard school, part I was the Abjurer Wizard.

I figure every other necromancer class has something for raising undead so this one isn't going to focus on that sort of necromancy. Where others have zigged, I must zag.

Slice after infinitesimal slice, intimate organic images within revealed by uncommon geometry. This is not us, not as we truly are, merely fractions seen from a limited perspective.

Now imagine what we creatures that live in the flash-sequence of moments, a single dimension of time, might look to those above:

First a worm, stretching from birth to death, a summation of everything we have been, and ever could be. Then, the connections appear. The worm is a braided thing. Our substance was once our father's, our mother's. To those above we are one line, separate only in some places. If that being above looks further, it will see these connections stretch beyond. All living things, all life on this planet, linked together at the foundation, the organism of organisms. 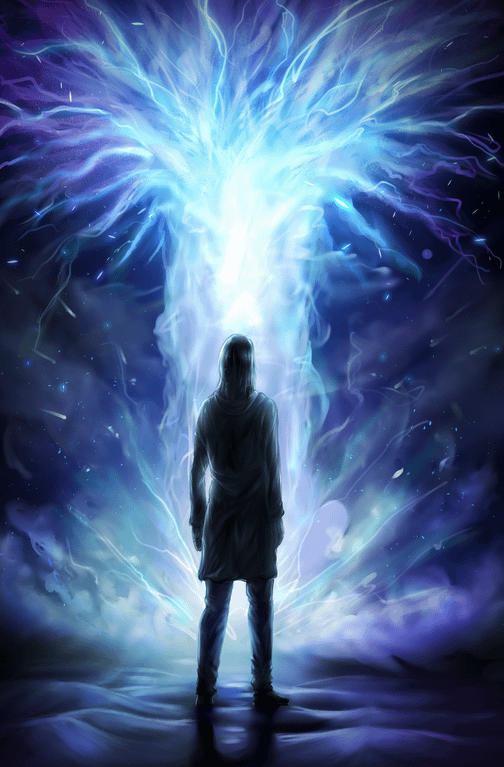 This tangled tree, rooted in the primordial soup and stretching tentative boughs into the end of time, is what necromancers gnaw away at like so many worms. Tear up its roots to make skeletons dance. Slurp the future from its womb. Drink and shout and revel and kill, for death's tide is ever-rising and you rise with it.

Perk:
Fun drugs can't outright kill you, and you get advantage on carousing checks.

Drawback:
You're incapable of sleeping if not either passed out drunk or in a place of death (tomb, battlefield, slaughterhouse, etc.).

Cantrips:
1. You can tell if someone's sick, injured, cursed, or otherwise close to death.
2. You can cause small plants to wither, food to spoil, and pregnant animals to miscarry if your shadow passes over them.
3. You can crudely speak dead languages with no living speakers, but not read them.

Mishaps:
1. Take 1d6 damage from rotting alive.
2. MD only return to your pool on a 1 for the next day.
3. Stunned for 1d6 rounds vomiting ectoplasm that takes on the shapes of your ancestors.
4. Deafened by the laments of shades for 1d6 rounds.
5. Possessed by a shade. For 1d6x10 minutes your personality is replaced with that of (1d6):
1. A simple-minded swineherd
2. A raving cultist
3. A bloodthirsty clown
4. A playful child
5. An ancient tyrant
6. A morose poet
6. Part of your body begins to resemble a long-dead corpse's. The affected part is (1d10):
1. Your eyes
2. Your mouth
3. Your right arm
4. Your left arm
5. Your back
6. Your legs
7. Your nose and ears
8. Your chest

1. Griever's Wail
R: 50'
T: creature(s)
D: 0
Living creatures within range take [sum] damage divided between them by the caster, save for half. If the [sum] exceeds an undead target's HP, it is compelled to lay itself to rest and de-animate.

2. Corpse Candle
R: touch
T: dead body
D: 0
Pulls a candle of adipocere from a dead body. Within that candle's light ruined, decayed, and destroyed things appear whole, untarnished, and alive (if applicable). Candles created with this spell last for [sum] minutes, and extinguishing the candle ends the spell.

3. Kiss of Death
R: 50'
T: creature
D: 0
Steals the last breath of a dying and unconscious creature, killing them and temporarily granting both [sum] HP and [dice] skills or bits of knowledge the creature may have possessed. HP granted cannot exceed the creature's maximum. The stolen HP and skills only last as long as you can hold your breath. At touch range the breath can be stored in a bottle for later use. Bottled breaths last [dice] hours.

4. Severed Sentry
R: touch
T: [dice] severed heads
D: [dice] hours
By closing your eyes you can see, hear, and speak through the affected heads. You can also make them bite if something comes within range. At 3+ dice the heads can fly at 1x their movement while alive and whole.

5. Ectoplasmogenesis
R: 30 feet
T: Broken or ruined objects/structures
D: [sum] minutes
Conjures ectoplasm to restore damaged objects to temporary wholesomeness. The max size or number of the object(s) is either [sum] objects small enough to hold in one hand or [sum]x[sum] square feet of material. The restoration happens fast enough that, for example, if you buried spear splinters beneath the floor they'd impale hapless bandits walking over them when restored.

Ectoplasmogenesis can interact with other necromancer wizard spells in the following ways, and probably other ways too which I haven't thought of but which you may:
-Can affect everything in range of Corpse Candle simultaneously regardless of size
-Stabilizes bottled breaths from Kiss of Death, increasing duration from [dice] hours to [dice] days
-Grants bodies to Severed Sentries, letting them walk around under your direction
-Renders corpses or corpse parts whole enough to dance for Danse Macabre, even if they've been reduced to ash
-Lets you eat ghosts with Cannibal Repast
-Temporarily recreates your body when you're in a soul jar

6. Danse Macabre
R: 50 feet
T: Creatures and corpses up to [sum] HD and/or [sum] corpses
D: Concentration
All affected must save or dance for the duration. You must provide music to dance to for the entire duration, though this can be as simple as humming. You can slowly lead the dance in a direction up to 5 ft./round. If you're about to lead a dancer into dangerous circumstances (off a cliff, into a fire, etc.), they immediately get another save. If a dancer is attacked they automatically break out of the spell. If the spell affects a living partner for every dead one, then all targets take disadvantage on their save.

7. Cannibal Repast
R: touch
T: human corpse
D: 0
People who eat parts of the affected corpse must save or be transformed into ghouls. Up to [dice] people affected will be compelled to see you as a good friend even if they know you're responsible for their transformation, though their primary loyalty will be to their hunger. If the affected corpse is related to them by blood they take disadvantage on their save and you can affect up to [dice]x2. Alternatively, this spell can be used to render [sum] rations worth of human flesh safe for consumption, no diseases or curses transferable.

8. Perchance to Dream
R: [sum]x10 feet
T: sleeping creature
D: one REM cycle
Enter the dream of a sleeping creature. If they succeed on their save you are just one figure within the dreamscape, and can communicate a message of up to [sum] words they'll remember upon waking. If they fail you gain control of the dream and can design it to your liking. If you make it a nightmare the target will gain no benefits of rest. If you've got a tooth from your target your range becomes [sum] miles and they take disadvantage on their save.

9. Ghostwalk
R: 0
T: self
D: [sum] rounds
Become translucent and mostly intangible. Non-magical attacks pass through you. You can push through solid matter as if it were thick mud. You can physically interact with other intangible things like ghosts.

10. Saturn's Sickle
R: 50 feet
T: creatures up to [sum]x2 HD or surface of [sum]x10 feet
D: 0
Sterilizes creatures or surfaces. When cast on creatures they must save or become unable to heal naturally, regenerate, or reproduce until the curse of Saturn's Sickle is removed. They are also cured of any diseases or parasites they might be harbouring. When cast over a surface the same is true of any plants or small animals in the area, and anything that might harbour diseases or parasites is cleansed.

11. Immurement
R: 50 feet
T: creature
D: 0
Target creature must save or be immediately dragged [sum]x5 feet underground by phantasmal hands. Creatures as big or bigger than an elephant a bonus to their save equal to their HD.

12. Soul Jar
R: touch
T: container
D: [dice] hours
Transfer your soul into a touched container (the "soul jar"), rendering your body comatose. You can communicate telepathically with anyone within 30 feet of the soul jar. You can also attempt to take over the body of anyone within this range. If they accept this (you can trick or coerce them into accepting this) then they get no save. Resisting targets get a bonus to their save equal to their HD. You can spend points of [sum] for the spell in the following ways:
-Penalize the save to resist on a 1-for-1 basis
-Hop from body to body (costs 1 point for the first hop, 2 for the second, and so on)
-Increase range of telepathy & possession (another 30 feet per point)
-Increase the duration by another hour for 1 point

If you also know Ghostwalk, you can cast it to let your soul temporarily leave its jar. If your original body is dead when the duration runs out or the soul jar is destroyed, you die and return as an NPC specter. If you spend 4+ dice you can make the soul jar or any body transfers facilitated by it permanent.