Another Way to Identify Potions

The typical way I've seen to identify potions in-game is to take a little sip from them. Enough to get a hint of their power, but not enough to waste the potion or get wrecked if their power is a bad one for the drinker. It's a good method.

But what is to be done when your players become unflappable potion-sommeliers, when you can't think of a decent hint, or when you just want to try something new? For one, there's this: 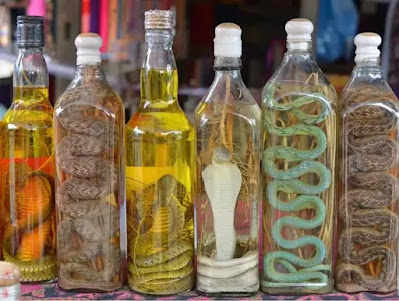 Snake wine (which can go by many names depending on its country of origin) is a beverage created by infusing alcohol with a whole snake. Its creation and imbibement was first recorded in China in 771 B.C., as a medicinal drink which contained the snake's essence. These medicinal properties are sometimes still used to advertize snake wine.

It also looks pretty damn cool. So here's the other way to identify potions: they've got a dead animal floating in them. The sort of animal indicates what the potion does, but ideally never in a too-straightforward way (say the potion contains a glassy jellyfish - is it a potion of invisibility? of bonelessness? poison? water-breathing?), so that you could make an educated guess without 100% certainty. In-game this could be justified by saying absorbing the essence of an animal is a vital part of potion-making. You can also mess with your enemies by swapping out the animal inside the potion.

This way also lends itself to further twists. Maybe the animal inside isn't quite dead, and resents your attempt to slurp up its home? Maybe the animal is way too big for the bottle it's impossibly stuck within, and breaking the glass or drinking the entire potion will cause it to explosively expand? Maybe there are two animals duelling within, and whichever wins (possibly with your help tilting the odds) will decide the potion's effect? And so on and so on.

Here's a list of potions and possible animals they could contain:

Clairvoyance - hawk, googly-eyed goldfish, a cluster of various animals' eyes, braided together by the optic nerve like a bunch of grapes