One day even protons will decay. We come ever closer: https://rememberdismove.blogspot.com/2020/03/picture-pong-5.html 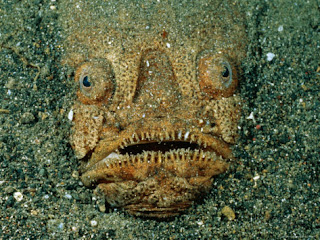 If every human being on this planet were to die tomorrow, how long would our faces last?

A few days, a few weeks before bloat and maggots wrecked them beyond recognition? Not much better if the bodies landed in a desert, or a bog (or do you think you could recognize even your own mother's face stretched on a mummy's skull?). Paint, ink, paper, electronics, these too fade away over a thin timeframe. Wood, stone, plaster, ceramics, are all far more fortitudinous.

If we were to disappear (overnight, or slowly but surely), and someone else were to find us after, they would not know us by our faces, but by our masks.

The same should be true for any other species.

Pictured is one such mask. It looks like flesh, it feels like flesh (but don't touch - it bites!), yet some fortuitous conjunction of craftsmanship and environment has preserved it through unknown eons, preserved the shape of those it was made in the image of. It also talks.

The mask is something like a wearable animatronic, for a genre of something like theatre. It depicts a stock character (the closest translation of which might be "Triumphant General"). The General can recite a wealth of speeches, marching songs, flattering national myths, and so on. It is also programmed to adapt to local dialects. Whoever wears the General becomes the God-Commander of the resurgent island-nation it was found off the coast of back when its population was mostly pearl divers, so long as they behave according to the unspoken public understanding of how the God-Commander should behave.

This island-nation's linguists are peerless. From the General's garbled dialogue they've extracted an entire culture's military doctrine. Their streets are warped and overlapping to accommodate victory processions adapted from an amphibious environment, and they have had many victory processions. Soldiers bear home bushels of loot in bizarre costumes cut down for human frames.

Their paleoarchaeologists hope to catch up. The locations of forts and fallen cities too are recorded by the General, obscured as they are by the tectonic shuffle. If one mask survived in such a condition, how many weapons could have done the same?

How would the makers of the General react, seeing the descendants of creatures that might have been nothing more than tree-shrews in their time ride a tide of conquest by its words? Was its entire character some satire we don't have the context to comprehend? The General chortles, "Death is nothing. Glory is forever".


& now your image, should you choose to accept it: 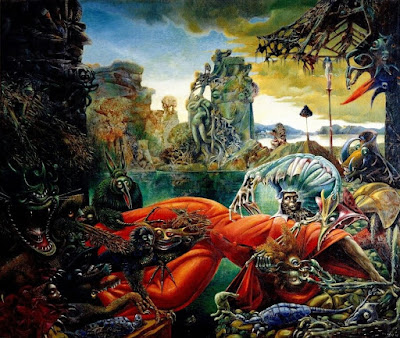